How are you making the most of today?

Reclaiming my full awareness has been fun - but also a bit scary.

This week I was back on the road, mindlessly consuming miles of tarmac and ancient fossil fuel.

Suddenly, 100 yards ahead (ok - 91.444 metres - but my brain is still wired in yards, feet and inches in the same way as perfecly bi-lingual friends will still count numbers in their own language - which I guess is the power of the language we first formulate - but that's another whole other blog topic...)

So - 100 yards ahead of me, the car in front clipped a traffic cone on the central reservation side of the fast lane. I'd never before witnessed or experienced so closely what happens when a car travelling at 70 (or even 80 mph or more) encounters a stationary object.  It skewed from side to side, looking like a bizarre version of a bucking bronco, from fast lane to middle lane and back again.

By luck more than good judgement, we managed to avoid each other and the car and driver made it in one piece across to the hard shoulder where he or she did whatever one does when we realise that we have avoided serious injury - or death - by a narrow margin.

Following this little drama, I slowed my speed in the universal driver reaction and went slowly and carefully for the next few miles.

Then, at about the time my body returned to stasis after the shock, and the distance increased between me and the incident, my speed crept up again and I settled back in to my ownership of the road.

Then in my left ear, I heard a slight buzzing sound. I looked across to the passenger window to see a large bee, who either was getting irrationally excited about a trip to the Midlands, or was getting upset at being trapped in my car.

Physics was never my strong point, so for a moment I was engrossed with the possible results that opening the passenger window would bring. It seemed like a binary decision - either the air would suck the bee out, or the blast would fling it further in.

I slowed down, opened the window and hoped for the best. 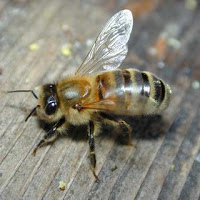 Buzzing stopped, window up, sigh of relief.
Until it started again - this time on my side of the car - I really should have paid more attention to Dr. Robson and the school physics lab at the time.
This time I did the job properly - opened the window completely and watched it disappear - (probably onto the windscreen of the car behind - in case Dr.Robson is out there somewhere?)

Then I was left uncomfortably pondering - was it one bee experienced twice? or two bees experienced once?

Was there a nest - or whatever bees make - in my car somewhere meaning that I might suddenly be blasted with some kind of Hitchcock-style shared intelligence stinging fury at being driven to the Midlands instead of to the South Coast for the day?
Shortly afterwards, a few people, who I never saw before in my life, drove past waving and mouthing something that I don't think was an enquiry about the bee/s or my health and I broke into another sweat and heart rate boost as I realised how little attention I had paid to the road or cars around me during the minutes that I paid to the bee/s. It dawned on me that twice in one shortish journey, I could have experienced a life-changing, if not life-shortening, different outcome.
There's nothing like a close shave to feel lucky to be alive - so having two close shaves within 20 minutes of each other is a powerful lesson.
How are you making the most of your day?
Posted by Hilary Cooke at 07:53