Where do you find your creative mo-jo?

Where you find your own creative mo-jo is an important question to answer - preferably before you realise that you have mislaid it!

I've really discovered the question out of the frustration of neglecting my own - I allowed it out of my sight and to slip from my grasp back in November and I haven't really been able to find it since. I have a hunch that it can happen to us all.

For various domestic, personal and professional pressures, choices and stories I tell myself,  I seem to have been existing on auto-pilot and that twilight zone of mechanical function, managing task, purposeful action and not much space has shrunk my spirit like a prune.

Thankfully, as a result of years on my very own Human Element bean-bag, I at least now know the difference (for me) between spiritually wizened prune and juicy fruit, between surviving and thriving and my own process of being fully alive - or just scraping by.  Thank goodness for that at least.

Otherwise - I might not discover the need to wake up and keep looking. I simply wouldn't know what I didn't know or what I was missing.

Of course, in my coaching endeavours, I can be a bit of a whizz (so they tell me) at helping other people to find theirs - but it's a more than a bit hypocritcal if my own insists on hiding behind the curtains.

I've spent a while crashing around looking for it, giving myself a good beating for being so stupid as to have lost it in the first place, and then got rather cross with "it" for not playing the game and being found.

Then I got a glimmer when I least expected it. It was gardening with all the delicious smells and senses after a long winter of neglect, a bit of a metasaga and a jogging of a memory of being 10 and moving to a new house with badgers in the wood at the end of the garden. I wanted to see a badger for myself, so every evening, I went thumping into the woods, did a 10 year old's oxymoronic version of sitting still and had no clue about which way the wind might be blowing my scent down to their sets. Needless to say, apart from a few fleeting glimpses of pale grey in the twilight, like my creative aliveness, they were ever elusive.

A new parentally influenced plan involved staying indoors in my own space, but laying down food trails in longer and longer spaces until they led eventually to my back door. Trial and error led me to understand that badgers love bacon - and before long, I had whole families of badgers playing on our patio in the evening light.

So - I still don't know where to find my creative energy exactly but I am now in a place of trusting that it's still there and that I do have to be open enough to let it find me (and I'll know when it does because I think it looks a bit like a badger!) 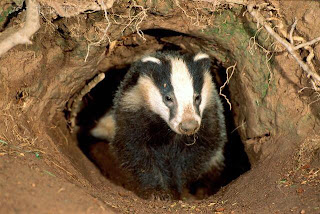 In the meantime, a few bits of mental bacon in the form of good reading, music, a bit more dancing on my desk and a lot more noticing what I wouldn't have noticed if I hadn't been noticing and I think it'll turn up soon.

Thanks to my colleagues and coaching clients who all contribute so much - you know who you are and also thanks to all you lovely people who have asked where the blog went and encouraged me to get going again!

Email ThisBlogThis!Share to TwitterShare to FacebookShare to Pinterest
Labels: The Human Element in Practice