What is your act of kindness for today? 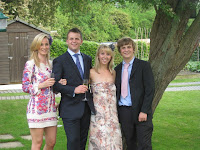 My family and my children are my lodestar, my reason for being and I love them beyond words. (Thankfully, they never read my blog, so I won't get locked in the loft again for being so sentimental!)

At the weekend, my youngest son suffered a nasty injury as the result of an accident that required reconstructive surgery to his right - and writing - hand. That's pretty hard to come to terms with when I brought them into the world, thankfully physically perfect, and have navigated them through endless childhood scrapes to try and ensure that they stay that way.

Anyway, such is life and its rich selection of lessons that we were chosen for this particular one. Consequently, in the last 48 hours, we must have been managed by at least 25 people face to face, and countless people behind the scenes and I want to take a few moments to reflect on the contribution of clinicians - and the kindness of strangers.

From a whole night spent in Accident and  Emergency on Sunday, through to the surgery today, we have experienced nothing but kindness from complete strangers to a level that is both humbling and moving and I have been struck by being so kindly treated by so many people from such a wide variety of nationalities, cultures, skin tones, languages and origins that I have lost count.

Today, as I saw my "baby" disappear through the wide double doors on his way to the operating theatre and out of my control or ability to keep him safe, I was moved by the simple humanity of the whole experience and quite literally by "the kindness of strangers".  I couldn't help feeling that if the whole world operated on this currency, it would be a pretty wonderful place in which to be.

Then, I went outside for some air and as it was a London Hospital, nearly collided with two heavily armed policmen,  with sub-machine guns strapped across their chests, as they strolled up Fulham Road in the summer sunshine. The contrast was like standing on a rake, with the handle of "reality" rushing up to thump me on the head.

I spent some time thinking about how lucky I am that a) I wasn't particularly scared of the police or their guns, and b) to have been able to commit my precious child to such safe and trustworthy hands in a fully equipped and hi-tec hospital with drugs a-plenty - and without money changing hands. This is more than would be true for a large percentage of the very people who had shown us such kindness since the weekend.

I don't want to use my own blog to make any political point in particular - but I do wonder what our level of treatment would have been like if people had not immigrated to London from countries without this level of human and medical care or where to encounter armed police would have resulted in a different outcome?

I think the "kindness of strangers" was a line from Tenessee Williams and A Streetcar Named Desire - and it is the second time I have been directed by it in less than a week. The other reference was an article written about an Afghan refugee who is devoting his life, post-asylum seeking, to becoming a paediatrician in the UK. He had such amazing care from the community when he arrived as a frightened child, that he wants to put something back.

I have learned a lot in a short space of time and possibly it's a lesson that I needed. Whether that is true or not, I intend to squeeze every ounce of learning from it.

I also intend to see if I can perpetuate "the kindness of strangers" for each day from now on by engaging in my own act of kindness and respect for my fellow human beings.

If everyone woke up each day wondering what kindness they could bestow on the world in general, I wonder what effect it would have?

I realise that I am feeling particularly sensitised and vulnerable right now - but I will still ask the question...

What will be your act of kindness for today?

I am planning to keep this question close to my heart - next to the photograph of my children...
Posted by Hilary Cooke at 15:20